The Veterans of the Stephentown Area LLC was founded by a local group of veterans in Stephentown, NY. Its purpose was to promote the social welfare of its veteran members and their families and to enhance community understanding of the contributions and sacrifice of individuals who have served in the military.

The veterans of the Stephentown area are interested in learning more about area residents who have served in the military. The organization has a fairly thorough list of the names of area residents who served during the Korean War and Vietnam Era.  We have enshrined their names on our veterans’ Park monuments and many belong to our veterans’ organization. We would like to do the same for additional veterans from the Stephentown area who have served in the military over the last forty years. Veterans who would like to be remembered on the monument wall or join the Stephentown area organization can do so by calling Phyllis Defreest at 518-733-6504. A copy of your DD form 214 will be needed.

History of the Stephentown Veterans Park

The Park was conceived in 2002 when local Veterans decided to build a lasting memorial to friends and neighbors who served their country. They formed the Veterans of the Stephentown Area Inc. which spearheaded the project. Fundraisers, the receipt of grants, the work of volunteers, and donations from area residents and businesses enabled their vision to be realized.

Stephentown Veterans Memorial Park was officially dedicated on November 13, 2004. The posthumous honoree that day was Lt. Colonel John Overlock – MIA, a former Stephentown resident whose Air Force jet crashed over North Vietnam on August 16, 1968. He is still officially listed as Missing in Action. His name along with other men and women who have served in the military beginning with the Spanish American War are inscribed on the memorial wall.

An obelisk honoring those who had served in the American Revolution and Civil War was added in 2008. There are no names listed for these wars as Stephentown encompassed a much wider area at the time. The Battlefield Cross Monument was added to the Park in 2017. The iconic helmet, weapon, boots, and dog tags have become a symbol of loss, mourning, and closure for the living.

We hope you enjoy and tour the Stephentown Veterans Memorial Park and reflect on the contributions of the area veterans who have served and sacrificed for the United States of America. 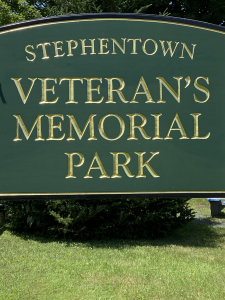 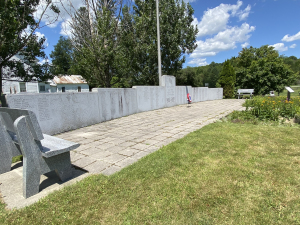 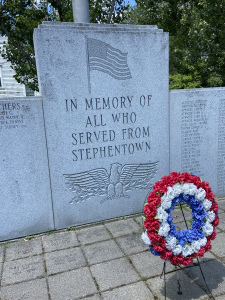 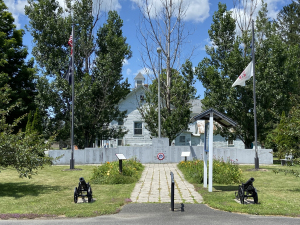 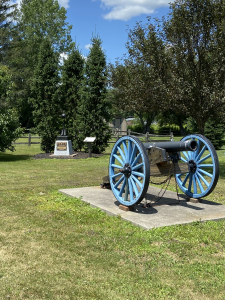 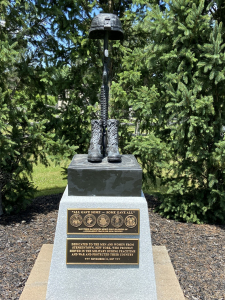 The Battlefield Cross Monument is a re-creation of a memorial erected when a member of the military has died on the battlefield. Service members may refer to it as  “a fallen soldier battle cross” or “battlefield cross. This symbolic display has been used in varying forms in all 20th-century conflicts waged by the United States and continues to be seen during military operations in Afghanistan and Iraq. The deceased’s helmet, weapon, and boots are placed on the ground on the battlefield or at a base camp, where a brief memorial service is held by surviving members of the squad to honor their fallen comrade. The use of the helmet, weapon, boots, and dog tags has become a symbol of loss, mourning, and closure for the living. 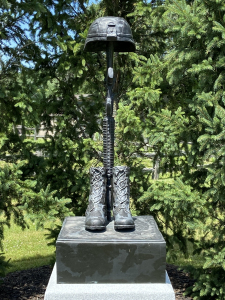 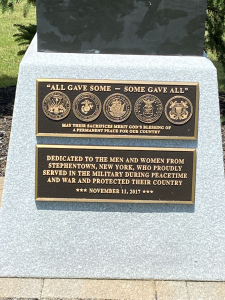