Congratulations to the winner of the 2022 Stephentown Memorial Library Robert J. Smith Scholarship

Carol Kirsimagi. Carol will be graduating from New Lebanon High School at the end of the month. She has been a active member of the Stephentown Community by volunteering with her church, Scouts, and through the New Lebanon School. The Board of Trustees of the Stephentown Library congratulate Carol on all of her achievements and wish her luck as she moves on to Le Moyne College to begin a career in nursing. 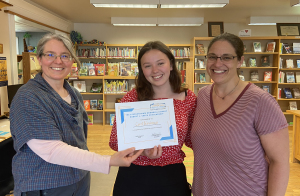 In June of 1988, Stephentown Memorial Library Trustee Ini Prior recommended that the library begin a scholarship fund for Berlin High School graduates with money that was donated to the library in memory of her mother. The other trustees were in favor of the idea and so began the Stephentown Memorial Library Award for Higher Education. It was officially voted on in January of 1989 and a scholarship account was started with a total of $640.

As the donated scholarship money earned interest, the SML Board of Trustees worked on the parameters of the scholarship and who would be eligible. In 1996, long time Trustee and library supporter, Betty Greene passed away and in her will, she left a sizable donation to support the scholarship. After this generous donation, the scholarship account had enough funding to start giving out scholarships to well deserving students. The very first scholarship given out went to Marcia Southard and Rebecca Schaffer in 1998.

In December of 2018, Board Trustee Robert J. Smith passed away after a battle with cancer. Bob lived a life that was dedicated to the service of others. He was a member of the United States Air Force for 23 years. He served as an EMT, firefighter, Flight Nurse, and was deployed to Iraq after 9/11. In the civilian world, Bob was a dedicated and well-loved nurse at St. Peter’s Hospital in Albany, NY. Even while fighting a painful battle with cancer, Bob never stopped volunteering for many different organizations.

After Bob’s passing, the Board of Trustees decided to rename the Stephentown Memorial Library Scholarship in honor of Bob. The scholarship was renamed The Stephentown Memorial Library Robert J. Smith Scholarship and it now rewards students who have demonstrated the same kind of devotion to community service that Bob was so passionate about. It is the hope of the Board that this scholarship will help to keep Bob’s memory alive and reward those who continue to devote themselves to their community, as Bob did.